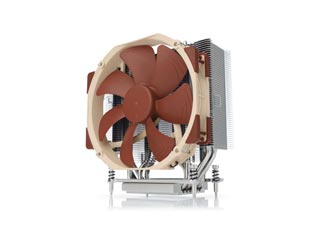 Continuing the legacy of Noctua’s classic NH-U-series, which has received more than a thousand awards and recommendations from international hardware websites and magazines, the
NH-U14S has become a benchmark for high-end 140mm single tower coolers. The TR4-SP3 version is a tailored custom model for AMD’s TR4/SP3 platform (Ryzen Threadripper / Epyc) and features a larger contact surface as well as the latest SecuFirm2™ mounting system for socket TR4/SP3. Topped off with the renowned quiet NF-A15 PWM 140mm fan, Noctua’s proven NT-H1 thermal compound and a full 6-year manufacturer’s warranty, the NH-U14S TR4-SP3 forms a complete premium-quality solution that combines maximum performance and superb acoustics for enthusiast-grade TR4/SP3 systems.

At 70x56mm, the copper contact surface of the TR4-SP3 version is more than double the size of the standard model. Tailored to fit the enormous integrated heat-spreaders (IHS) of AMD’s TR4/ SP3-based processors, this customised design allows for an optimal heat flow from the CPU over the base to the heatpipes and on to the cooling fins.

With six heatpipes, a fin surface area of more than 6000cm² and the large NF-A15 140mm fan, the NH-U14S TR4/SP3 provides a superior level of cooling performance that makes it ideal for the most high-end, enthusiast-grade TR4/SP3 systems.

The NF-A15 140mm fan supplied with the NH-U14S supports PWM for convenient automatic speed control through the motherboard. In addition, the maximum fan speed can be reduced from 1500 to 1200rpm using the supplied Low-Noise Adaptor for even quieter operation.

In order to assure optimal compatibility with SLI and CrossFire multi-GPU setups, the Secu-Firm2™ mounting for TR4/SP3 makes it possible to offset the cooler by 3 or 6mm towards the upper edge of the motherboard, thereby increasing clearance of the top PCIe slot.

Noctua’s SecuFirm2™ mounting systems have become synonymous with quality, safety and ease of use. The TR4-SP3 variant has been completely custom-designed for the new socket and is particularly easy to install: Put on the heatsink, fix the four spring-loaded screws and you’re done!